The Sutra of the Foremost Shurangama at the Great Buddha’s Summit Concerning the Tathagata’s Secret Cause of Cultivation, His Certification to the Complete Meaning and all Bodhisattvas’ Myriad Practices 1:1

Translated during the Tang Dynasty by Shramana Paramiti from Central India. 1:70

Reviewed by Shramana Meghashikara from Uddiyana. 1:76

Edited by Bodhisattva-precepts Disciple Fang Yong of Qing He, former Censor of State, and concurrently Attendant and Minister, and Court Regulator. 1:77

At one time the Buddha dwelt at the city of Shravasti in the sublime abode of the Jeta Grove. 1:88

With a gathering of great bhikshus, twelve hundred fifty in all. 1:93

All were great Arhats without outflows, disciples of the Buddha, dwellers and maintainers. They had fully transcended all existence, and were able to travel everywhere, and to accomplish the awesome deportment. 1:99

They followed the Buddha in turning the wheel and were wonderfully worthy of the bequest. Stern and pure in the Vinaya, they were great exemplars in the three realms. Their limitless response-bodies took living beings across and liberated them, pulling out and rescuing those of the future so they could transcend all the bonds of dust. 1:103

The names of the leaders were: the greatly wise Shariputra, Mahamaudgalyayana, Mahakaushthila, Purnamaitreyaniputra, Subhuti, Upanishad, and others. 1:108

Moreover limitless Pratyekas who were beyond learning and those with initial resolve came to where the Buddha was to join the bhikshus’ Pravarana at the close of the summer retreat. 1:111

Bodhisattvas from the ten directions who desired counsel in order to resolve the doubts in their minds were respectful and obedient to the Awesome but Compassionate One as they prepared to seek the Secret Meaning. 1:114

Then the Tathagata arranged his seat, sat quietly and peacefully, and for the sake of everyone in the assembly proclaimed the profound and mysterious. Those in the pure assembly at the banquet of Dharma obtained what they had never obtained before. 1:116

The Immortal’s kalavinka-sound pervaded the ten directions and Bodhisattvas as numerous as the sands of the Ganges gathered at the Bodhimanda with Manjushri as their leader. 1:118

Then King Prasenajit, for the sake of his father, the late king, arranged on the day of mourning a vegetarian feast and invited the Buddha to the side rooms of the palace. He welcomed the Tathagata in person with a vast array of superb delicacies of unsurpassed wonderful flavors and himself invited the great Bodhisattvas. 1:121

In the city were also elders and laypeople who were also prepared to feed the Sangha at the same time, and they stood waiting for the Buddha to come and receive offerings. 1:125

The Buddha commanded Manjushri to assign the Bodhisattvas and Arhats to receive offerings from the various vegetarian hosts. 1:127

Only Ananda, who, having accepted a special invitation earlier, had traveled far and had not yet returned, was late for the apportioning of the Sangha. No senior-seated one or Acharya was with him, so he was returning alone on the road. 1:127

On that day he had received no offerings, and so at the appropriate time Ananda took up his begging bowl and, as he traveled through the city, begged in successive order. 1:130

As he first began to beg, he thought to himself that down to the very last danapati who would be his vegetarian host he would not question whether they were clean or unclean; whether they were ksatriyas of honorable name or chandalas. While practicing equality and compassion he would not merely select the lowly but was determined to perfect all living beings. limitless merit and virtue. 1:131

Ananda already knew that the Tathagata, the World Honored One, had admonished Subhuti and great Kashyapa for being Arhats whose hearts were not fair and equal, and he regarded with respect the Tathagata’s instructions on impartiality, to save everyone from doubt and slander. 1:132

Having crossed the city moat, he walked slowly through the outer gates, his manner stern and proper as he honored with propriety the method of obtaining food. 1:134

At that time, because Ananda was begging in sequential order, he passed by a house of prostitution and was waylaid by a powerful artifice. By means of a mantra of the Kapila religion, formerly of the Brahma Heaven, the daughter of Matangi drew him onto an impure mat. 1:135

With her licentious body she stroked and rubbed him until he was on the verge of destroying the precept-substance. 1:136 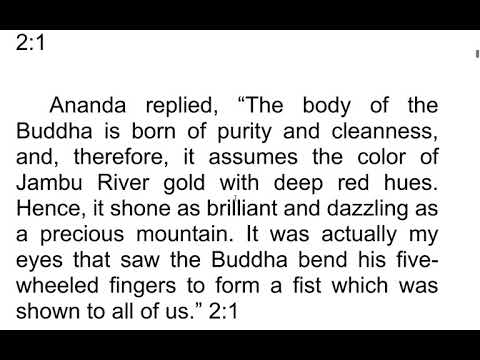