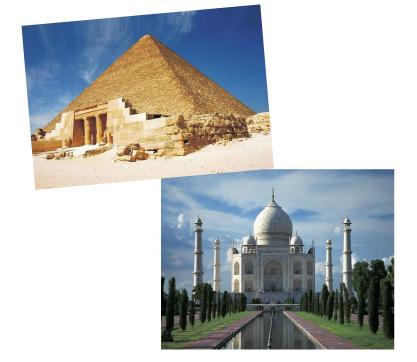 Read the passage and then do the tasks that follow. (Đọc đoạn văn và làm bài tập bên dưới)

who (line 4) refers to the thieves

it (line 8) refers to the Great Pyramid

It (line 9)refers to the Great Pyramid

each (line 12)refers to the block of stone

Work in pairs. Discuss the question: “Which of the wonders of the world do you prefer and why?” (Làm việc theo cặp. Thảo luận câu hỏi: “Kỳ quan thế giới nào em thích? Tại sao?)

A: Which of the wonders of the world do you prefer?

B: Among many wonders of the world, I like Ha Long Bay in Quang Ninh province, Vietnam.

A: Can you tell me the reason?

B: Yah, Ha Long Bay is recognized one of the wonders of modern world. It is the pride of Vietnamese.

Read the passage carefully, then choose the correct answer.

Taj Mahal, a mausoleum in Agra, India, regarded as one of the most beautiful buildings in the world. The Mughal emperor Shah Jahan had it built in memory of his wife, Arjumand Banu Bagam, known as Mumtaz Mahal (Persian for “Elect of the Palace”), who died in 1631.

Building commenced about 1632. The mausoleum was complete by about 1643 and the surrounding complex of buildings and gardens was com—WebKitFbout 1653. Situated on the southern bank of the Yamuna River, the white marble mausoleum is composed of four identical facades, each containing a large central arch 33 m (108 ft) high. A large bulb-shaped dome, over 73 m (240 ft) tall, rises over the center, with four smaller domes surrounding it. The building is raised on a square podium with a minaret at each corner. It is flanked by two red sandstone buildings-a mosque and its replica, the Jawab (Answer), a building of which the main function is visual balance. Visitors approach the Taj Mahal through an imposing red sandstone gate, decorated with inscriptions from the Muslim holy book, the Qur’an (Koran). The gate and accompanying walls also contain a vast, geometrically laid out garden, 305 m (1,002 ft) on each side. The enclosed garden, itself a Muslim symbol of paradise, is centered on a large, raised pool. Canals divide it into four equal parts, each containing flower beds, fountains, and cypress trees (symbols of death).

Inside theTaj Mahal, the tomb of Mumtaz Mahal stands at the center of an octagonal hall, while the slightly larger tomb of Shah Jahan, who died in 1666, is off to one side. Both are elaborately carved and inlaid with semiprecious stones, illuminated by sunlight filtering through an elaborately carved marble screen that is also studded with jewels.ey were bu>1. What is the Taj Mahal?

2. Which of the following is not true?

a. The Taj Mahal was built by the Mughah emperor Shah Jahan.

b. It took approximately 20 years to complete the mausoleum.

c. The front of the building is similar in all sides.

d. The mausoleum has four domes around it.

a. is a mosque where people worship

b. has a main function of decorating.

c. was decorated with inscriptions from the Koran

d. was built by red stones

5. According to the passage, which of the folwer

a. The garden of the Taj Mahal is a Muslim symbol of paradise.

b. In beauty of design and rich decorative detail, Taj Mahal is one of the best buildings in the world.

d. The tombs of Shah Jahan’s and his wife are located at the center of the mausoleum.