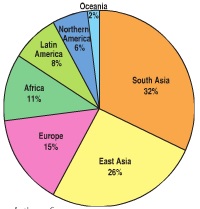 To sum up, Asia has more population than in other parts of the world.